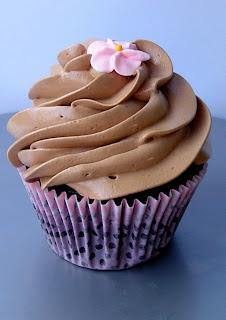 It’s Cupcake Hero time! The lovely Laurie of Quirky Cupcake is holding her monthly mingle titled ...Cupcake Hero. Every month she chooses an ingredient and those of us who are brave bake a cupcake around the chosen ingredient. This month's ingredient was liquor. I was so excited about this month’s theme. Mostly due to the hundreds of possibilities.

The cake part of the cupcake does not retain much of the raspberry alcohol taste, but the aroma of raspberries remains. That’s because Chambord has a strong raspberry scent. To the buttercream, I added raspberry extract, which made the icing incredible.

The cupcakes were so scrumptious and smelled heavenly. They smelled so good that I was thinking this should be a car air freshener. You know, one of those of little trees you hang from the rear view mirror. If you find yourself in the mood for delicious cupcakes and in need of an air freshener for your car, then look no further. (Tee-hee)

If you’d like to participate in Cupcake Hero then click here. The entries are due February 23 and the round up will be here. I’ll see you there.

Divide the batter among the liners and bake for 20-22 minutes, until a toothpick inserted in the center comes out clean. Transfer the pan to a rack and cool, then remove the cupcakes and cool completely on a wire rack.

In the bowl of an electric mixer set over a pan of simmering water, combine the eggs and the sugar. Cook whisking constantly until the eggs reach a 160F degrees on a candy thermometer.

Attach the bowl to the mixer fitted with the whisk attachment. Beat the egg white mixture on high speed until stiff peaks (not-dry) form. Continue beating until fluffy and cool about 6 minutes.

Switch to the paddle attachment. With the mixer on medium-low speed add the butter a couple tablespoons at a time. When all the butter has been added, beat on high speed for 3-5 minutes until smooth. On low speed add the raspberry extract and beat 2 minutes to eliminate any air bubbles. To the buttercream add the 4 ounces of melted chocolate and beat until incorporated.

Gigi, what a beautiful cupcake! The flower on top makes it extra adorable. Raspberry and chocolate are great together!

Your frosting skills are incredible, it looks simply luscious! That little pink flower on top just makes it perfect. :)

Oh my! They look amazing. I agree your frosting always looks perfect! I'm not sure if you knew this, but raspberry has always been one of my fav fruits. I love them. Have since I was a kid. Chocolate and raspberry together, YUM! Thanks so much Gigi!

Those look so so great! I love the Chambord idea! You really can't go wrong with raspberry and chocolate. Yay!

Those look so so great! I love the Chambord idea! You really can't go wrong with raspberry and chocolate. Yay!

Beautiful cupcakes! I've never tried Chambord now I definitely want to though. I must save this recipe!

These are so beautiful! I love the flower on top and I bet they smell incredible!

I'm taking a Wilton class, I hope my frosting and decorating will get better.

The cupcakes are absolutely beautiful! I can't wait to try these. I agree~ Chambord is a great liqueur. And with chocolate? YUM!

Intensely gorgeous, and what a nice flavor combination! Lovely work!

Beautiful cupcakes! Love how you piped the frosting and the flower on top. Lovely job!

cupcake air freshener--what a great idea! :) they are beautiful!

That frosting looks so moist and smooth and good. I really like how much of it there is. :) Raspberries go well with chocolate.

I am afraid of the wrath that could follow but I've never had chambord before! But your picture makes me want to try! Looks like stiff competition this month! Great job! ps. do you mind if I ask what piping tip you used for such perfect frosting? thanks!
-Clara
http://iheartcuppycakes.wordpress.com

Wow these sound incredible. I think chocolate and raspberries go so well together. Love the look of your frosting. Not tried raspberry liquor before but it sounds delicious.

Mmmmmm...chambord seems like it would be great in here! Honestly, I can't wait to try these.

As a sidenote, I tried your brownie cupcakes the other day & everyone loved them! Thanks for all the great recipes. :)

I've been mulling over my entry for this month. But Chambord; Well played Miss GiGi. It's only my favorite white wine add in.

Gigi, you need to have a baked-good-decorating company - your frosting skills are absolutely impeccable!!

Oh, so lovely! I love Chambord, so I can imagine that these are fabulous cupcakes. Good job!

How do you pipe such a gorgeous top? I would really love to learn - that makes the cupcake (at least visually, the recipe sounds great)!

You guys are too kind! I have received a couple of e-mails and inquiries about my icing tips. All of my decorating tips are Ateco (this one is #855) I have a couple of small ones, but the majority of them are in the #800's. I also like use Matfer Professional Bimar reusable pastry bags. I hope this helps.

I love chocolate and raspberry but haven't ever used chambord. I agree with everyone else that your icing defies belief - really beautiful!

Absolutely beautiful. So glad you decided to use Chambord.

Wow! it looks so beautiful :-)

wow you got such lovely buttercream, and nice swirls!

Hey Gigi...these are absolutely precious! Very pretty indeed! Thanks for stopping by my blog! :0)Deeba

Ohh how pretty! I love the frosting and the raspberry chocolate combo, yum...

I'll bet they smelled heavenly -- they're gorgeous, too. The meringue sounds delish.

How To Eat A Cupcake said...

these look so amazing gigi...and love your frosting swirl!

These are so pretty - looking for a raspberry chocolate cupcake for a friend - these look like something she would love.