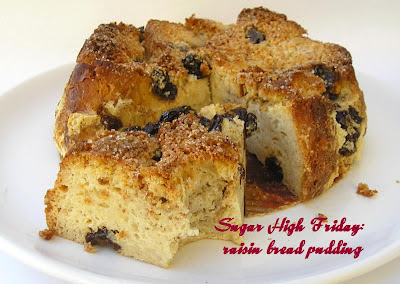 I know it’s Sunday. I just ran out of time on Friday to post it, but it’s by no means late. Zorra of 1x umrühren bitte is hosting this months Sugar High Friday and she has declared it “pudding Friday”. That’s right, pudding, in any form.
At first, I thought …great! Then reality set in. There are sooo many variations of pudding. I just couldn’t decide. Did I want something chocolate-y? Mousse? Steamed? Decisions, decisions. I procrastinated so long that the choice was made for me. Earlier in the week, I had made “raisin bread” and it had gotten stale. Instead of throwing it out, I rejuvenated it by turning it into delicious raisin bread pudding. I really didn’t have to add too much to the custard since the bread had a lot of flavor on its own. I did add a handful of raisins just because I really like raisins. I ate a slice for breakfast with coffee and it was fab.

So grab your stale bread and join in the fabulousness of Sugar High Friday~ Pudding. You have until December 24, 2007 to get your “pudding on”.
Raisin Bread Pudding
Preheat oven to 350°F
I used a 6-inch paper liner to bake in. If you use a pan, you must butter the pan.
1. Whisk together milk, half and half, and eggs. Then add in the sugar, salt, and spices. Set aside.
2. Line the pan with the bread slices. Then pour the custard over the bread and make sure the bread absorbs all the custard.
3. Bake for 1 hour or until the custard has taken. You can serve bread pudding right out of the oven, or wait until warm.
Baked by Gigi

GiGi- you are amazing! Do you eat all of this? I bet neighbors line up for leftovers. =D

Sandi~ I usually only cut a small piece for my sweetie and me. Then everything gets packed up and goes to my sweetie's office for co-workers or the neighbors. And sometimes the mailman :)

What a great way to use up leftover bread. It looks delicous and almost like a panettone.

This looks delicious! Way to use up leftovers and transform them into something even better.

oooh, the Raisin-Bread Pudding looks sensational!! Such a wonderful entry for this month's SHF event - I contributed a rice-pudding dish :0)

I have been wanting to try making a bread pudding for a while now. The idea of bread baked with custard sounds so good. Your bread pudding looks really good. Bookmarked.

Just came across your blog, and I really like it.

I am not one for bread pudding, but spicy pistachio truffles? Yeah, that's more my style. Yum.

This looks delicious! I love a good bread pudding in the winter - so comforting!

I'm not a big pudding fan, but I love bread pudding and I also love raisons. This sounds fantastic!

Stunning! It would be great if we could rejuvenate with such a great result as well. ;-)

Thank you for your participatin in SHF.

I think you made a delicious decision -- this looks FAB! And I bet it was woooonderful for breakfast.